We offer the latest, 2021-1 NEXT, 2020-2 PREMIUM, 2021-1 MOTION and 2020 MOVE Navigation Map Updates including the FSC Activation Code for cars with CIC and NBT navigation system (which has an integrated sat nav system on an internal hard drive HDD). CIC navigation system has different map types: PREMIUM, MOTION and MOVE, while the NBT system has the NEXT map type. View and Download DAS BMW-CIC system installation and user manual online. DAS BMW- iDRIVE Professional Navigation CIC system (7 buttons). BMW-CIC system car navigation system pdf manual download. The Theme Modified By: Info44 & Mouad Amenchar (volavka). CarTechnoloGY does not condone any illegal operations. CarTechnoloGY does not accept responsibility for the loss of any equipment used Everything discussed on this forum is for experimental and educational purposes ONLY.

iDrive is an in-car communications and entertainment system, used to control most secondary vehicle systems in late-model BMW cars. It was launched in 2001, first appearing in the E65 7 Series. The system unifies an array of functions under a single control architecture consisting of an LCD panel mounted in the dashboard and a control knob mounted on the center console.

iDrive introduced the first multiplexedMOST Bus/Byteflightoptical fiberdata busses with very high bit rate in a production vehicle. These are used for high-speed applications such as controlling the television, DVD, or driver assistance systems like adaptive cruise control, infrared night vision or head-up display.

iDrive allows the driver (and, in some models, front-seat passengers) to control the climate (air conditioner and heater), audio system (radio and CD player), navigation system, and the communication system.

iDrive is also used in modern Rolls-Royce models, as Rolls-Royce is owned by BMW[1] and in the 2019 onwards Toyota Supra which is a collaboration between BMW and Toyota.[2] BMW also owns the Mini brand, and a pared-down version of iDrive is available on those cars, branded as Connected.[3]

An early prototype iDrive (called the Intuitive Interaction Concept) was featured on the BMW Z9 concept in 1999.The production version debuted in September 2001 in the BMW 7 Series (E65) and was built on the VxWorks kernel[4] while the Navigation computer used Microsoft Windows CE for Automotive;[5] this can be seen when the system reboots or restarts after a software crash, displaying a 'Windows CE' logo.

The first generation of iDrive controllers in the 7 Series was equipped with only a rotary knob. The GPS computer ('NAV01', located in the trunk) was only capable of reading map CDs.

In October 2003, a menu and a customizable button was added to the controller. The new GPS computer ('NAV02') was updated to read DVDs, featured a faster processor and the ability to display the map in bird's-eye view ('perspective').

In April 2005, the iDrive controller was changed again, the turn knob having a new leather top. The last hardware update of the GPS unit ('NAV03') got a faster processor again. The map display is antialiased. The 8.8' wide-screen display was updated, having a brighter screen and the ability to control a MP3 capable 6 CD-changer or a BMW iPod Interface. Possible options include a TV tuner, DVD changer, BMW Night Vision, side view camera and a rear view camera.

M-ASK stands for MMI Audio System controller and is manufactured by Becker. This is a limited version of the iDrive computer with a small 6.6' display and is only found on 5, 6 Series and the X5 or X6, without the navigation option.

In addition, it can be ordered as an option in Europe on the 1 Series and 3 Series as 'Business navigation', which has basic navigation abilities. Early versions of the Business navigation could only display directional arrows, but the latest version can also display 2D maps. iDrive Business Navigation uses a different map DVD than iDrive Professional Navigation. In addition, as only one optical drive is available, one cannot use both navigation and listen to a CD simultaneously.

When iDrive Professional is ordered the M-ASK system is replaced by iDrive CCC Professional with a dual slot dash mounted drive computer and larger 8.8' display.

iDrive Business is available on the following cars;

The above list can vary depending on the region.

iDrive controller on a BMW 530d

It debuted in 2003 with the E60/E61 5 Series and is based on Wind River VxWorks, a real-time operating system.[6]CCC stands for Car Communication Computer and uses a larger 8.8' wide-screen display. It was available on the following cars as an option;

CCC based systems use a map DVD from Navteq in a dedicated DVD drive.

This is a minor update to iDrive Professional debuted in March 2007. It adds additional programmable buttons in the dashboard to directly access frequent functions and it removes the haptic feedback from the iDrive controller. It is available on the following cars as an option;

This is a minor update debuted in September 2008 for Model Year 2009 cars equipped with iDrive Professional that did not get the new CIC based system. These cars get the new iDrive controller that is also used on cars with CIC. The actual iDrive computer (CCC) remains the same. This update is available on the following cars;

It debuted in September 2008 with F01/F02 7 Series. CIC stands for Car Information Computer and is manufactured by Becker, utilizing the QNX operating system. It is available on the following cars as an option:

The CIC system is a major update to iDrive, replacing the display, computer and the controller. The display is of a higher resolution, and is generally more responsive than CCC, to address one of the common complaints of iDrive. Internet access is also supported.[7]

CIC-based systems use maps from TeleAtlas that are installed on an internal 2.5' 80 GB Hard Disk Drive (HDD). This HDD can also store up to 8 GB of music files for playback. For facilitating the uploading of music files to the HDD, a USB port is provided in the glove box.

Following 2009 LCI production, all CIC-based iDrive systems support DVD video. This, however, is only operational when the vehicle is in the 'Park' position for automatic transmissions, or while the parking brake is set for vehicles that have a manual transmission. DVD audio will continue to play while driving.

BMW introduced a further update to the iDrive Professional System in early 2012, calling it the 'Next Big Thing' (NBT). It was introduced in current generation cars as an option, including:

The update includes extensive hardware and software changes including cosmetic enhancements, faster processor, more memory, detailed 3D maps and improved routing. In addition, the capacity of the internal HDD has been increased from 10GB to 20GB. NBT also introduced a redesigned iDrive controller with optional handwriting recognition capabilities and gesture controls. This was achieved through a capacitive touch pad on top of the iDrive controller. NBT also removed the need for a separate COMBOX module for A2DP and USB media as those functions were integrated directly into the NBT Head Unit. BMW Online was also replaced with the newly introduced Connected Drive, which relied on a hardware TCB module with a built-in SIM card for mobile connectivity.[8]

NBT EVO (Evolution) was released starting in 2016 and represented the first major change in the operational logic of iDrive since being introduced in 2001. The familiar vertical list of text menus was replaced by a horizontal set of dynamic tiles, each able to show real time information. This update saw major updates to the iDrive hardware, including the ability to interact with the system via touch screen for the first time. BMW's Connected Drive services were further enhanced with this upgrade to the iDrive system, and the TCB module was replaced with a newer, faster ATM module. NBT EVO also introduced basic gesture controls as an optional extra on select BMW models.

NBT EVO was available on the following BMW Models:

The design rationale of iDrive is to replace an array of controls for the above systems with an all-in-one unit. The controls necessary for vehicle control and safety, such as the headlights and turn signals, are still located in the immediate vicinity of the steering column. Since, in the rationale of the designers, the air conditioning, car audio, navigation and communication controls are not used equally often, they have been moved into a central location.

iDrive caused significant controversy among users, the automotive media, and critics when it was first introduced.[9] Many reviewers of BMW vehicles in automobile magazines disapproved of the system. Criticisms of iDrive included its steep learning curve and its tendency to cause the driver to look away from the road too much.[10][11] Most users report that they adapt to the system after about one hour of practice,[citation needed] and the advent of voice controls has reduced the learning curve greatly.[6]

A new iDrive system (CIC) was introduced in September 2008 to address most of the complaints. iDrive NBT, introduced in 2012, brought further improvements.

The iDrive M-ASK and CCC systems are based around the points of a compass (north, south, east, west) with each direction corresponding with a specific area. These areas are also colour-coded providing identification as to which part of the system is currently being viewed.

Also, at the iDrive home screen, the control knob can be pushed downwards to provide access to the car's control panel (iMenu), which gives access to a variety of operational parameters. 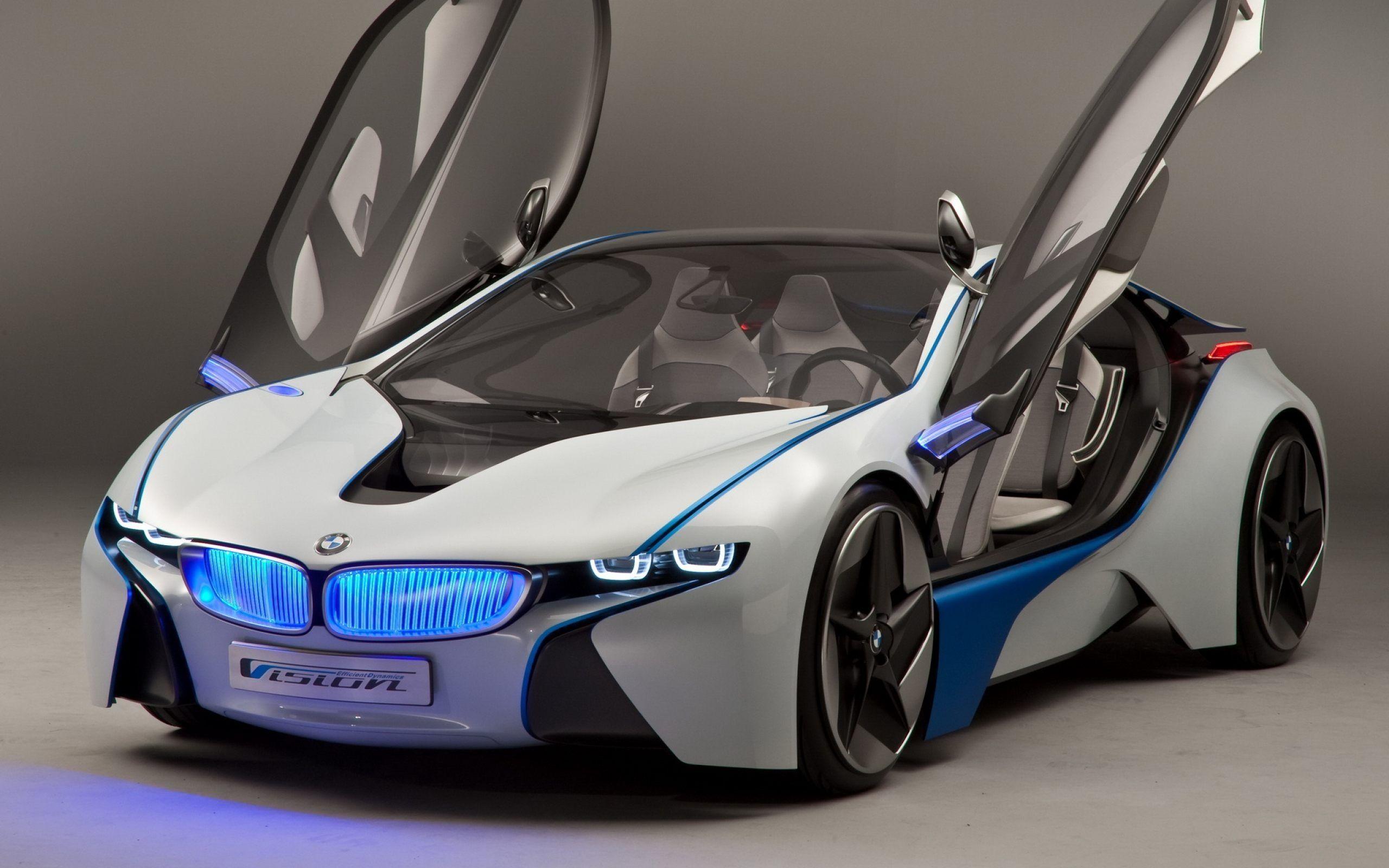 Starting in 2007, iDrive added programmable buttons (6 USA/Japan, 8 in Europe) to the dashboard, breaking tradition of having the entire system operated via the control knob. Each button can be programmed to instantly access any feature within iDrive (such as a particular navigation route, or one's favorite radio station). In addition, a dedicated AM/FM button, and a Mode button (to switch between entertainment sources) were added for North American-market vehicles.

iDrive is controlled by manipulating the control knob. This can be pushed north, south, east, west, inwards (down) or rotated left and right.The iDrive system includes a button marked 'Menu' behind the control knob that provides quick access to the home screen.

iDrive uses a widescreen display that is split into a 2/3 main window, and 1/3 'Assistance Window'. This allows the driver to use a function or menu, while simultaneously maintaining secondary information. For example, if the driver is not in the Navigation menu, they can still see a map on the assistance window. Other information that can be displayed includes navigation route directions and a trip computer.